Sarah Nolen has a Masters of Fine Arts in Puppetry from the University of Connecticut; and a bachelor’s degree in Cinema-Television from Southern Methodist University, with a minor in Children’s Media.

LEARN MORE ABOUT SARAH NOLEN:
After jumping from Texas to Connecticut, Sarah worked a yearlong stint of puppet gigs in New York before moving to Boston in 2017 to become Puppet Showplace Theater’s third-ever Resident Artist. She is an interdisciplinary artist living and working in Waltham, Massachusetts.

Known for her versatile, witty, and innovative work across multiple puppetry styles, Sarah works as a puppeteer for both stage and screen. She has performed with the Boston Pops Orchestra, the off-Broadway immersive theater production of “Pip’s Island,” and toured internationally as part of the ensemble for Red Ball Theater’s Reverse Cascade.

Sarah’s work has been performed at the Festival de Casteliers in Canada, the Greenwoods Puppet Festival, and on the streets of Denmark. She has performed in Puppet Slams across the country; three of her pieces were selected for the National Puppet Slams of 2013, 2014 and 2015.

In addition to her training at the University of Connecticut, Sarah has been a student in many professional workshops, including Sesame Street’s Puppeteer Workshop, Sandglass Theater’s Summer Puppetry Institute, The National Puppetry Conference at the Eugene O’Neill Theater Center, and David Fino’s Brooklyn Puppet Conspiracy.
In television, Sarah has worked as a production coordinator for nationally-syndicated shows on networks such as CMT & HGTV.

She has experience with all sides of the camera — from developing ad campaigns for universities, production designing indie features, and directing puppet films. Most recently, she was the director of photography for the web series COZY CORNER (2020). 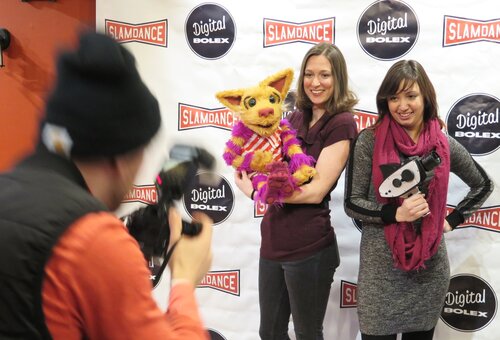 As a director, her kids’ TV project, TREEPLES (2016) was selected to screen at film festivals around the country, including the Slamdance Film Festival in Utah, the Atlanta Film Festival, and the Brooklyn Academy of Music’s Puppet Shorts Block. She was a 2015 recipient of The Mister Rogers Memorial Scholarship in support of the project.
As a puppet builder, Sarah has interned with Puppet Heap in Hoboken, and worked as a builder for AchesonWalsh Studios in Brooklyn. Sarah received a Drama Desk Award Nomination for “Outstanding Puppet Design” for her work with Sinking Ship Productions’ The Hunger Artist.

Through her company Puppet Motion, Sarah is able to provide consulting, puppet building & media work for all types of productions. Puppet Motion works with the emotional development curriculum for “Insights Intervention, LLC,” building puppets and promotional content. Over the years, Sarah has collaborated with clients such as Wee the People, The Boston Pops Orchestra, Suffolk University Theater Department, and Boston’s own Metropolitan Opera Chorale.

This website uses cookies to improve your experience while you navigate through the website. Out of these, the cookies that are categorized as necessary are stored on your browser as they are essential for the working of basic functionalities of the website. We also use third-party cookies that help us analyze and understand how you use this website. These cookies will be stored in your browser only with your consent. You also have the option to opt-out of these cookies. But opting out of some of these cookies may affect your browsing experience.
Necessary Always Enabled
Necessary cookies are absolutely essential for the website to function properly. This category only includes cookies that ensures basic functionalities and security features of the website. These cookies do not store any personal information.
Non-necessary
Any cookies that may not be particularly necessary for the website to function and is used specifically to collect user personal data via analytics, ads, other embedded contents are termed as non-necessary cookies. It is mandatory to procure user consent prior to running these cookies on your website.
SAVE & ACCEPT